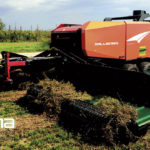 What is the main purpose of El.Fa? To be competitive in such a wide and complex market.

In order to be at the forefront in all the sectors in which we operate, we believe it essential to research and develop new technologies. These certainly require significant investments in time and money. To this end, we adopted the so-called proposal “From industrial districts to technological districts” issued by the Region Emilia Romagna. This one aims to develop new technologies in the area and put in close cooperation companies and research facilities.

In November 2010 El.Fa established a new Temporary Joint Venture named Agritech-Lab consisting of: El.Fa srl., Gallignani spa, Officine Meccaniche Buzzi srl and Costruzioni Meccaniche Luciano Frega s.r.l. The aim is to combine the skills and expertise of each company founding a well-motivated team in order to fulfil an innovative project. Although not really part of the ATI, have been involved in the project several University Departments and Laboratories of the High Technology Network of Emilia Romagna such as the DIEM Laboratory, CIRI – Advanced Applications in Mechanical Engineering and Materials Technology and the ARCES – Advanced Research Center on Electronic System, both belonging to the Bologna”Technopolo”.

The Aim of the project is to “merge” into a single “system” three machineries currently on the market – a round baler, a bale wrapper, and a hay rake – creating a brand new machine that allows us to optimise all stages of the processing chain by reducing working times, but at the same time improving the quality of the output. From this intense activity born a completely innovative integrated system for the collection and processing of the fodder named “combined TRI”. It will allow an important technological advantage in behalf of the referential production chain on the national and international market. 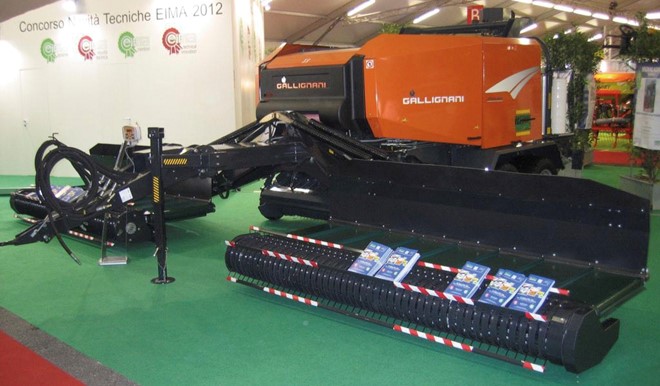 Our share of the project is to design and realise the electronic control system.

After various evaluations, we opted for a system that concentrates all the electronics in only one device, differing from the current one that consists of a modular system of “electronics distributed on the machine.” We also considered important to provide this new control system with the possibility of openness to the world of ISO-bus standard, for which it has been implemented along with other buses. ISO-bus is a standard communication protocol that “travels” on a physical Can bus known particularly in the auto-motive sector. The standardization allows the communication between various devices from different manufacturers simplifying the management of the electronic devices for the users. However, if on one hand, that new system is a simplification for users, on the other hand, it is a considerable complication for designers since the structure is very complex for both software and hardware. ISO-bus provides that a standard terminal, named Virtual Terminal (VT) situated on the tractor, shall make “available” its resources (display, keyboard, buzzer, etc.. ) to the various Electronic Control Unit (ECU) located on the machines towed by the tractor. In that way, the VT is the user interface, while the ECU controls the machinery.

This system is an alternative to the “proprietary” communication protocols which “travel” to various sorts of BUS, such as Can, Lin, RS485, etc (very often developed by each manufacturer).

The innovation by El.Fa. (a flexible future-oriented system)

As often happens, every solution has pros and cons, in this case too, the analysis leads to say that the “proprietary” system being aimed at a very specific application, hits well the target of low-costs solutions and management efficiency. Whereas a standardized system such as ISO-bus, requires more complex and expensive hardware and software structures to allow a wide use in different applications.

The cost of the ISO-bus system, now higher than other systems, is estimated to reduce in the event that the system will spread widely, helped in this by the law of averages. Bearing in mind the conflicting needs of commercial offices, we decided to design and realise a flexible system, with an eye to the present and one to the future!
We provided our ECU for various types of serial interfaces, creating a system that allows us to connect both VT ISO-bus and our User Interfaces (UI). Summing up we can then connect:
– VT terminal with standard ISO-bus on a Can bus;
– IU terminal with proprietary protocol ElFa on a Can bus;
– IU terminal with protocol and RS485 bus (currently used) and our current terminals. 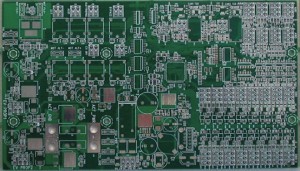 The structure of our ECU

The ECU is the master control unit; it is located on-board and controls the operation directly. A firmware allows a powerful microprocessor not only to manage the inputs and outputs, but also to interconnect to a User Interface (UI) that can be a VT (Virtual Terminal) ISO-bus standard, to manage a USB port and to create a powerful system logger for diagnostic purposes.
In this case, the ECU is composed of a single PCB that supports all the electronic components, but also the connectors, fuses and power supplies. The board is inserted into a solid plastic case and each cable comes out with its own cable gland, in order to get the best water- and dustproof conditions.

A significant element is that by connecting a standard USB memory stick to the port in the ECU, it is possible to update the firmware, of both the ECU and our UI. Furthermore, there is the possibility to download the operating data of the machinery (logger function), that transferred to a PC, can be analysed by assistance personnel to make targeted and fast diagnoses even at great distances, since every operator can easily do this procedure and send a file via the Internet. However, there is the possibility of assembling a GSM modem and set it up to remote manage these operations.

The user interface is the terminal from which you can manage the machinery and see all data.
Our ECU can be managed by a commercial standard ISO-bus VT, or one of our current IU, on RS485 bus or on a Can bus. As previously said, this solution has been designed to allow both the use of different models of IU, produced currently and in large volumes, but also other models, some of which under study but that may be developed in the future too.
We will then be able to cover a wide range of solutions, from the low cost one, that cannot afford to use ISO-bus, to complex systems that require the use of standard VT.

The evolution of the new product by El.Fa

The preliminary study was long and articulate; first of all, to define how the product should have been, afterwards to define, develop and test the various parts of the circuit.
Particular attention has been paid to the serial bus CAN, to the galvanic isolation systems – between the control parts and the ISO-bus one (as required by the standard) – and to the power supplies in the ECU; all that in order to create an “indestructible” system against adversities in an environment so difficult as the one in which agricultural machineries work.
The final version of the board has been preceded by an intense engeneering activity that required many months of work and created various versions of the many parts of both the hardware and the firmware. All this work has been carried out side by side with the evolution of the mechanical part. This part too has been the result of innovative ideas  and thus difficult to define while the first stage was under way. From the beginning of the project, one of the key points was to engineer something that was not only a feasibility study, but that could have allowed later-on in a quite short time, with the right conditions, to start a production.
For this reason, the whole team has devoted time to the definition of the overall layout, the development of the cables, the placement of the control unit and anything else that could have been  defined at this stage.
This activity has allowed us to develop basic concepts that can easily be transferred to the machineries of the next-generation, which as it is known, require more and more integration with the surrounding world, bearing in mind the constant need of simplification for the final customer.

In the absence of your explicit consent, we will not track any type of cookies - except those necessary for the operation of the site - in relation to navigation on the site.

Before expressing your preferences regarding your consent to the collection of statistical and practical or customization cookies, we invite you to read the Cookie Policy available through the following link: Information on the processing of personal data
Necessari Statistics
More information ▾

Necessary cookies are technical cookies whose use does not require the user's consent. These cookies are essential to enable you to navigate a website and use its full functionality. Without these cookies, which are absolutely necessary, a website could not provide certain services or functions and browsing would not be as easy and easy as it should be. A cookie of this type is also used to store a user's decision on the use of cookies on the website. Technical cookies are essential and cannot be disabled using this feature. In general however, cookies can be disabled completely in your browser at any time.

Statistical cookies are used to monitor the performance of the site, for example to know the number of pages visited or the number of users who have viewed a particular section. The analysis of these cookies generates anonymous and aggregated statistical data without any reference to the identity of the site's visitors. They are also useful to evaluate any changes and improvements to be made to the site itself.

Necessary cookies are technical cookies whose use does not require the user's consent. These cookies are essential to enable you to navigate a website and use its full functionality. Without these cookies, which are absolutely necessary, a website could not provide certain services or functions and browsing would not be as easy and easy as it should be. A cookie of this type is also used to store a user's decision on the use of cookies on the website. Technical cookies are essential and cannot be disabled using this feature. In general however, cookies can be disabled completely in your browser at any time.

Statistical cookies are used to monitor the performance of the site, for example to know the number of pages visited or the number of users who have viewed a particular section. The analysis of these cookies generates anonymous and aggregated statistical data without any reference to the identity of the site's visitors. They are also useful to evaluate any changes and improvements to be made to the site itself.